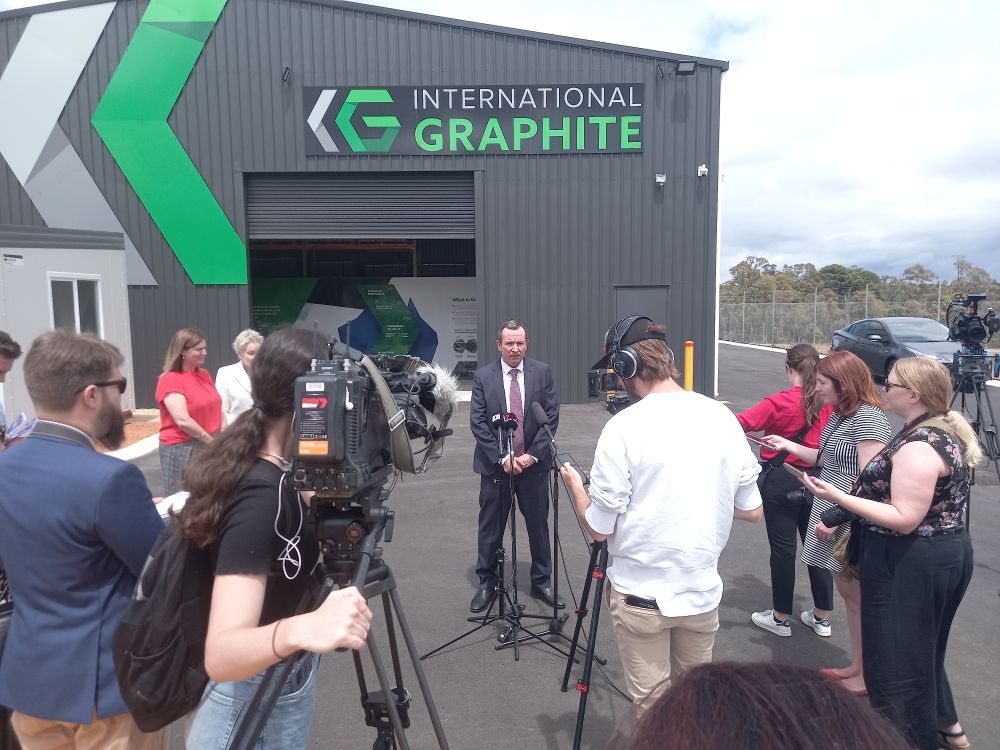 Fifty guests including Government, community and media representatives attended the event. More than 30 local suppliers and specialty trades have assisted in the building fitout. The facility houses the company’s pilot graphite processing plant, one of the first of its kind in Australia. It will also house a research laboratory and new product qualification-scale equipment currently on order.

International Graphite’s Collie operation is a frontrunner in the global push for new production facilities to meet escalating demand for raw materials to support decarbonisation of transport and energy storage.

The company’s pilot plant, which has successfully produced micronised and spheroidised graphite, is an important proof of concept showing that Western Australia has the capacity to become a global producer of graphite material for battery anodes.

More than 30 local suppliers have been involved in setting up the new facility which houses pilot scale graphite micronising and spheroidising equipment. Yesterday, (24 Nov) the company announced the purchase of bigger equipment which will take the operation to the next level and produce product for qualification with potential international customers.

The Collie facility is also setting up a research laboratory incorporating an ultra-high temperature furnace that will be used to develop a thermal graphite purification process.

“By the end of 2023 we expect to be completing construction and commissioning of a commercial scale graphite processing plant here in Collie. By 2025, we expect to have developed a fully integrated battery anode project with feedstock coming from our planned graphite mine at Springdale, near Hopetoun, on WA’s south coast.

“Batteries are critical to the success of global decarbonisation and we are proud to be helping Australia build its sovereign capability and achieve the full value of both its engineering expertise and natural graphite resources.

“International Graphite has the technical expertise to implement our vision and we are grateful for the support and assistance we have received from both the WA Government and Collie community.”

The Western State Government has contributed $2 million, through the Collie Futures Industry Development Fund, to help establish commercial scale graphite micronising operations at Collie. Purified micronised graphite is used as a conductive additive to battery cathodes, and other industrial applications, and well as being an essential step in the production of purified spheroidised graphite for battery anodes.

Western Australia’s Minister for Regional Development Alannah MacTiernan said: “The opening of International Graphite’s new processing facility is a big win for Collie’s Just Transition Plan – an effort to attract new 21st century industries to the region as we decarbonise our economy.

“International Graphite selected Collie as a strategic location for the new processing and manufacturing plant, based on existing regional industries and infrastructure, a skilled local workforce, and an ability to access overseas markets.

“It is exciting to see new industries taking shape in Collie, that are building the foundations for future jobs.”

International Graphite is the only graphite company implementing a complete mine to market operation in Western Australia by developing the Springdale Graphite Project, near Ravensthorpe on the State’s south coast, to supply graphite concentrate to the Collie downstream processing operation.

Graphite is a critical mineral in Australia, the US, Europe and other nations. It is essential for producing the anodes in lithium-ion batteries. It takes up to ten times more graphite than lithium to make a battery and global supply shortages are forecast over the next decade[1] as the world searches for enough material to keep up with the demand for batteries in electric vehicles, renewable energy storage and other green technologies.

Graphite passes through numerous stages of refinement to become battery anode material. At the end of the process, the material has been refined, shaped, purified and coated to make it suitable for battery anode use.